Amphetamines are stimulants affecting the Central Nervous System, while metamphetamine is an addictive stimulant that acts on specific brain cells. They are produced in the form of tablets and capsules of different colours, powder, crystals and liquid solution. They both develop a very strong psychological and physical addiction.

Immediately after the effects wear off, users can feel exhaustion, depression, irritability and paranoia. Long lasting effects are extreme anorexia, brain damage, and breathing and heart disorders. Ultimately any of these symptoms could result in death.

MDMA, commonly known as ecstasy, is a synthetic drug very popular among young people today. It is specific because of its combination of stimulating and hallucinating effects. It is produced in tablet form, often with pictures on the surface. It develops very strong psychological addiction.

Ecstasy is taken orally, frequently at group celebrations and in clubs and discos. It is known as the “club drug”. The effects start about 20 to 60 minutes after ingestion and last 3 to 6 hours. Users feel euphoria, a sense of well-being and relaxation, heightened mental and physical abilities and general endurance.

After effects are insomnia and irritability, while longer lasting effects can be more serious and can lead to permanent brain damage, psychosis, paranoia and chronic depression. Increased body temperature and blood pressure can cause death even on first use.

Heroin is a drug belonging to the opiate group and is made from processing poppies. It is a powder whose colour varies from brown to white, dependent on the level of purity. Heroin is the cause of a high number of deaths amongst users. No matter how it is taken, a very strong psychological and physical addiction is developed.

It can be ingested by sniffing, smoking or by injection. It affects opiate receptors in the brain and causes a very strong feeling of euphoria (flash). Over the next few hours the user is in a condition similar to sleep (stoned) and they successively drift from awareness to sleep. On the physical level, heroin slows down breathing and heart rate, it widens the blood vessels, and gives a feeling of warmth. Pupils are very narrow.

Withdrawal is followed by abstinence syndrome “physical crisis”, manifesting through all over body pain, nausea, vomiting, diarrhoea, excessive sweating, fever and shivering. This physical crisis typically lasts 7 to 10 days, but feelings of weakness and apathy can last for several months. That can be the end of physical addiction but not the psychological one. Continuous cravings and ongoing desire for drugs are very common and are the reason why users constantly go back onto heroin. 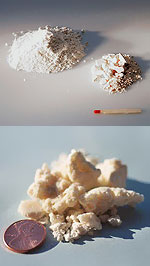 Cocaine is a very addictive stimulant, directly affecting the Central Nervous System. It is obtained from the coca plant that grows in South America and is produced as a white crystallized powder.

Crack is made as refinement of cocaine and can be produced in wedges of a wax substance which can be smoked. It can develop an extremely strong physical addiction in its users.

Both can be sniffed, smoked or injected and are, less commonly, ingested by chewing or swallowing. Instant effects are euphoria and heightened psychophysical abilities. Senses of hunger, tiredness and the need for sleep disappear but the psychological effects last for only a very short time, typically 15 to 60 minutes. Users therefore have to take cocaine repeatedly over a period of time in order to prolong its effects.

After effects are nausea and vomiting, heart disorder, increased tiredness and problems with blood pressure. Visual, audio and tactile hallucinations are possible (“like bugs are crawling under the skin”), possibly leading to cocaine delirium which frequently gives suicidal ideas and behaviour, very dangerous for both the user and the environment.

Signs of use: hyperactivity, excessive talking, dilated pupils and decreased power of understanding. 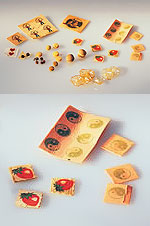 LSD is the strongest synthetic drug, it has no colour, taste or scent and is very halluceogenic. The effects of LSD are unpredictable, dependant not only on the amount that is taken but also on the user’s expectations and the environment in which the drug is taken. It is most often produced as “trips”- small papers on which a solution of LSD is deposited.

The effects start about 1 1 hours after ingestion and usually last up to 12 hours, sometimes longer. The first stage is marked with euphoria and loud laughing, with a feeling of relaxation, happiness and wellbeing. Hallucinations can be pleasant or unpleasant – “good trips” or “bad trips” – and are a potential danger, both for the user and to the environment. There are numerous physical and pyschological reactions such as intensive and rapid swings in mood and emotions, speed and content of thought and a changed awareness of time and space.

After effects are confusion, poor coordination and tiredness. Regular use of LSD causes extended anxiety, depression and psychotic reactions that can lead to death. One of the extended effects of LSD are “flash backs” – the spontaneous appearance of hallucinations even without use of drugs.

Signs of use: incoherant or unconnected talk, rapid mood swings – from crying to laughter, dilated pupils.

Marijuana is the most commonly used drug worldwide. It is a green, brown or yellow mix of dried and cut up small flowers, leaves and seeds of the Cannabis Sativa plant (Indian hemp). The cannabis plant is also used to produce hashish, a brown waxy substance produced from the flower. Marijuana develops psychological addiction, and can be harmful from first as well as prolonged use.

Marijuana is in the group of halluceogenic and depressive drugs. It is usually smoked, mixed with tobacco, as a cigarette (“joint”) or in a pipe. It also can be taken with food or drunk as a tea. The effects start several minutes after smoking, peaking after 10 to 30 minutes. Initially users feel euphoria, relaxation, cheerfulness, excessive talking and uncontrolled laughter.

After effects: Users can feel an overwhelming need for sleep, an increased appetite, and problems with memory and concentration may occur. Long-term use of marijuana leads to a danger of permanent loss of coordination and attention, apathy and a lack of interest and motivation.

Methadone is a synthetic opiate specific for its lasting effects. It is used in medical treatment of heroin addicts. It has been shown that methadone abuse is very common in drug addicts. According to research by an American agency “Drug Abuse Warning Network”, between 1998 and 2001 the abuse of methadone grew by over 300%. The increase is also seen in the numbers of criminal acts and deaths caused through methadone.

It is produced as tablets, drops and ampoules. A very strong physical and psychological addiction quickly develops comparable to heroin addiction. Effects of the drug begin 20 to 30 minutes after ingestion, and last a few hours, dependant on dosage. Euphoria, loss of appetite, excessive sweating, constant body scratching, all are indicators that a person took methadone. Bad side effects are sleepiness, confusion, dizziness, nausea and vomiting.

Immediate after-effects are abstinence syndrome (“physical crisis”) manifesting through pains all over the body, nausea, vomiting, diarrhoea, excessive sweating, fever and shivering. The crisis is typically very strong and long lasting, and in many cases hospitalization and medical care is recommended. Because it develops a very strong psychical addiction and is used in medical treatment for heroin addicts, there is always a danger that the user will try to get heroin again, or what ever else that can satisfy his need for methadone. Methadone can be the cause of violent behavior.

Raskršće is civil association for fighting addiction. The goal of Raskršće is to with the help of high quality rehabilitation program provide a way out of drug addiction to an addict and a full recovery to his family.

Your ticket for the: informacije_droga_en